The gastric sleeve procedure has become very common in terms of weight loss surgery.  In spite of its recent popularity among patients and surgeons it’s still controversial, especially regarding bougie size.

What is a Bougie?

The bougie (BOO-zhee) is a measuring device in the form of a long, flexible tube. Surgeons use it to guide them when dividing the stomach.

There is no unanimous agreement on the ideal bougie size for a given patient.  This is a challenge because each procedure requires the surgeon to find the size that will be the safest, yet allow for the most amount of weight loss.

The smaller the bougie that is used, the smaller the sleeve and the resulting stomach restriction.  But there is a greater risk of leakage and instances of stricture.  A stricture occurs when scar tissue develops and interferes with the normal movement of food and liquids into the stomach.  It can only be corrected with surgery.

On the other hand, if a larger bougie is used, there is less risk but then maybe less weight loss as well. 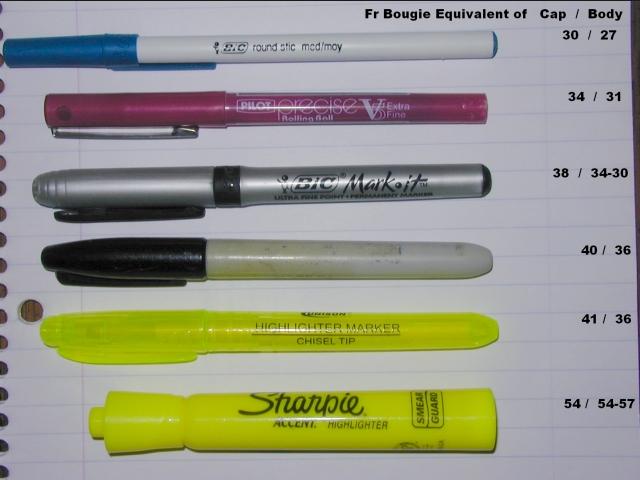 The results show that bougies of 40F and larger had incidents of leaks with virtually no change in weight loss.  Pending further research but caution is recommended in using the smallest possible bougie due to the risks outweighing the benefits.

(Study: The Effects of Bougie Caliber on Leaks and Excess Weight Loss Following Laparoscopic Sleeve Gastrectomy. Is There an Ideal Bougie Size? Obes Surg. 2013 Aug 3. [Epub ahead of print])

Surgeons surveyed reported that in the range of 32F – 50F the most common size being used is 36F, (used by 32% of them).  Studies showed that the procedure is relatively safe while there are still variations in bougie size.

What is the Best Bougie Size for Gastric Sleeve Surgery

Many variables determine bougie size including patient input, their height and weight and of course the surgeon.  It’s typically smaller when this is a stand alone procedure (32-50F) rather than a duodena switch (50-60F).

Before undergoing the sleeve gastrectomy procedure you must discuss bougie size with your surgeon.  You need to understand his reasons for recommending the size he intends to use.  It’s your stomach and you need to be comfortable.

The sleeve will help reduce hunger and limit food intake, but you need to follow a reduced calorie, nutrient-rich diet if you want to be successful.

One of the newest weight loss surgeries being performed is gastric sleeve surgery.  It is performed on people who are obese with a body mass index of 35 or more.  When a person has this surgery it involves removing a portion of their stomach and followed by the creation of a thin vertical sleeve of stomach about the size of a banana.  The surgeon staples the stomach using a stapling device.  This is where the leak complications can happen.

What causes a leak in this area?

There are two main reasons that a leak can occur:

Complications from a leak

When a leak happens it can cause a severe infection from the leakage of gastric contents and gastric fluids.  This infection can lead to two very serious complications.

Either of these can cause major organ failure, which is when many of your organ systems quit working and in time it can lead to death.

How will you know if you have a leak?

There are many different symptoms that you can have if you have this complication.  After having gastric sleeve surgery your surgeon will go over everything with you including any possible complications and the symptoms they would produce.  The symptoms for a leak may include:

You have a leak so how is it fixed?

Fixing this complication of gastric sleeve surgery involves either another surgery or putting in a drainage tube.

This is a rare complication and occurs in one out one hundred patients.  It can be a life threatening complication if it is not taken care of so bottom line is if something does not feel right, seek immediate medical attention.