On September 25th 2013, the Centers for Medicare and Medicaid Services (CMS) has dropped the requirement that bariatric surgery facilities be certified as a Bariatric Center of Excellence.

CMS released this statement on September 24, 2013 giving their reasons:

“We believe the available evidence is sufficient to determine that the requirement for facility certification/COE designation for coverage of approved bariatric surgery procedures does not provide improved outcomes for Medicare beneficiaries.”

Why remove the Center of Excellence requirement? 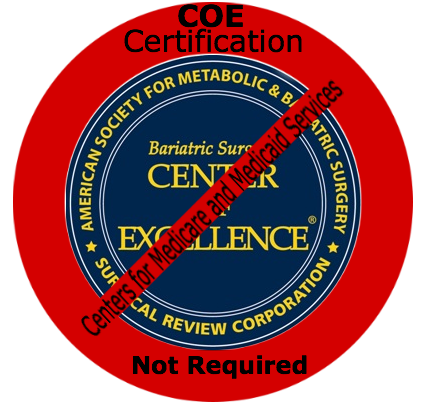 They concluded that certifying these facilities did not improve results.  There was also a downside and this was that fewer people could get the services they needed.  These included mostly the disadvantaged.

The policy in place since 2006 requiring these facilities be accredited to be covered on Medicare has been reversed.

This National Coverage Determination (NCD) on Bariatric Surgery for the Treatment of Morbid Obesity spelled out certain criteria for patients, procedures that would be covered and specific requirements that bariatric facilities must have in order to have coverage.

In 2005 the thought was that these certifications were beneficial but since then this has not been proven out.

A formal request to have this 2006 policy lifted was submitted by representatives of the Michigan Bariatric Surgery Collaborative.  The members requesting that CMS consider removing the certification policy were John Birkmeyer, MD, Nancy Birkmeyer, PhD and Justin Dimick, MD.

These doctors spelled out the results of several current studies that showed no real difference in mortality or complications between the centers of excellence and the facilities that were not.

So the CMS opened a National Coverage Analysis (NCA) in January 2013, in order to review the evidence.

They analyzed nine current research articles on the topic, they got input from the public at large and they reviewed professional society position statements.

The issues raised by those commenting had to do with:

The major issue was access to care.  One of the studies concluded that “the Center of Excellence requirements have increased the travel distance for Medicare patients”, making it more difficult to access.

This program establishes a national standard for accreditation so that patients have better care before, during and after their procedures.  Across the country there are currently about 750 inpatient and outpatient center accredited by either the ASMBS or ACS.

CMS is the only major insurer to have dropped the certification requirement.  Others still may require accreditation in order to cover bariatric surgery:

Before the decision was made by CMS to drop the accreditation Justin Dimick, MD, who was in favor of this decision said:

“There are definitely two points of view on the issue.  There is the professional association point of view, representing the people who perform accreditation, and obviously they support keeping the requirement, which is certainly understandable.  Doctors Birkmeyer and I represent the scientific perspective, which is about what the evidence shows, and we think the evidence does not support the need for mandatory accreditation.”

“We are not against certification,” said Dimick.  “We just don’t think it should be mandatory.”