Are you considering Bariatric Surgery as a weight loss option? You will find a lot of information about weight loss surgery which can take some time to research and read. However, there are some really cool facts for you here, extracted from years of research to help you understand the history of Bariatric surgery and how popular it has become today as a valid and safe weight loss option.

#1 – The youngest known weight loss surgery patient to date was only twelve years old.  In a small number of cases, a child could potentially require assistance with weight loss in order to treat other serious health conditions.  Bariatric surgery is the last option for children who are dealing with comorbidities, and are at greater risk due to obesity. Weight loss surgery in children does not interfere with the body’s normal growing and developing processes, but it does reduce the chances that the child will become an obese adult. Only a doctor can decide if weight loss surgery is the right choice for a child.

#2 – The most obese country in all of the world is NOT the United States of America.  You’ve probably heard this exaggeration for years but it simply is not true. While the U.S. does struggle with weight issues with more than 30 percent of Americans carrying around a BMI of 30 or better, the most obese country is actually an island in the South Pacific called Nauru. On this small island, more than 94 percent of the population is obese. Other obese countries include the United Kingdom and Mexico.

#3 – Japan and South Korea are the two countries with the least number of obese people.  This is due to cultural differences and differences in what is considered attractive by a society as a whole. While the U.S. holds at number three in the list of obese countries, the average weight across America for men and women combined is about 180 pounds or 81.928 kilograms. This is approximately 20 kilograms higher than the average weight in 1970, nearly five decades ago.

#4 – In the U.S. and Canada, twenty-five weight loss surgeries are performed every hour, on average!  This number is a bit larger than Europe, which averages 7.6 per hour, and Asia with only 1.5 per hour. Of these Bariatric surgeries reported in the study, nearly 90 percent were performed using a minimally invasive surgery technique called laparoscopy. This popular method is used for two types of weight loss surgeries: Gastric Banding and Gastric Bypass. The least common Bariatric surgery was the Biliopancreatic Diversion with duodenal switch, according to these numbers.

#5 – The very first recorded weight loss surgery was performed in ancient Greece.  The patient was a man named Dionysius, who was believed to have lived a very extravagant life. These early records suggest he was quite a tyrant …and quite obese due to his lifestyle. You would not want to trade places with Dionysius though, because today’s easy in-and-out laparoscopic method is amazingly painless when compared to the method he endured, which called for the insertion of long needles through the belly and hips. Bariatric surgery became a valid choice for Americans starting in 1954, changing the way people viewed obesity treatments. 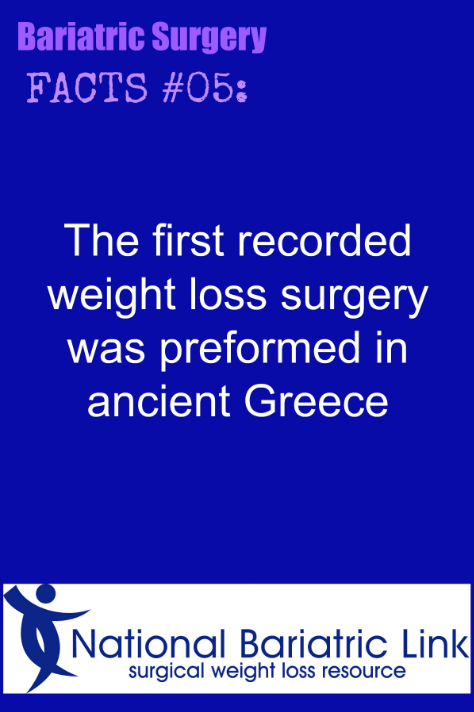 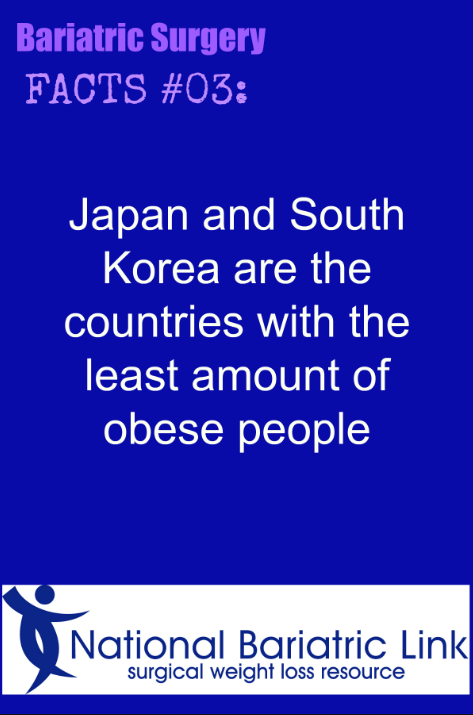 After Bariatric Surgery: Your After-Care Plan