New Year’s Eve was always rather special as I was growing up, a time when my mamma, my older sisters, and their husbands took time to sit around the table, playing board games and dominoes. Sometimes, the children were included in the festivities. Other times, we played with our new Christmas toys around my dad’s feet in the next room.

I have never seen another family have so much fun playing Clue and Monopoly, their loud chatter and raucous laughter carrying across the house when Scarlet was caught in the library with a candlestick. Listening to my mother laughing and carrying on with my sisters was as much entertainment as being allowed to stay up past my bedtime.

The time would always pass by quickly, and as the clock struck midnight, my dad (who was far too serious for board games) would grab his .22 rifle and head for the front porch, intent on shooting a few celebratory rounds into the air. He wasn’t the only one; it was fun to listen as the neighbors fired their guns off too.

Yes, we lived in the country where shooting firearms is quite normal, and yes, I am a southern girl – I love comfort food! On New Year’s Day, we always dined on the traditional choices: pork, black-eyed peas, cabbage, and corn bread. Mom had schooled us on the right foods to eat on New Year’s, but we weren’t really all that superstitious or worried about good luck… we just love good ole down home country cooking.

New Year’s Eve was always a good time for mamma to bring out her green Betty Crocker crock pot (everything was green or yellow back then). Black-eyed peas and ham would slow cook in the crock pot so mom could escape the kitchen and have some fun, making memories before everyone had to return home from the holidays.

If you are looking for an easy Bariatric recipe that won’t keep you chained to the stove, this recipe is sure to make you smile from ear to ear. Throw these Black-Eyed Peas and Ham in the slow cooker, and have some fun with your relatives before they bid you farewell, as they return to work, school and other obligations. 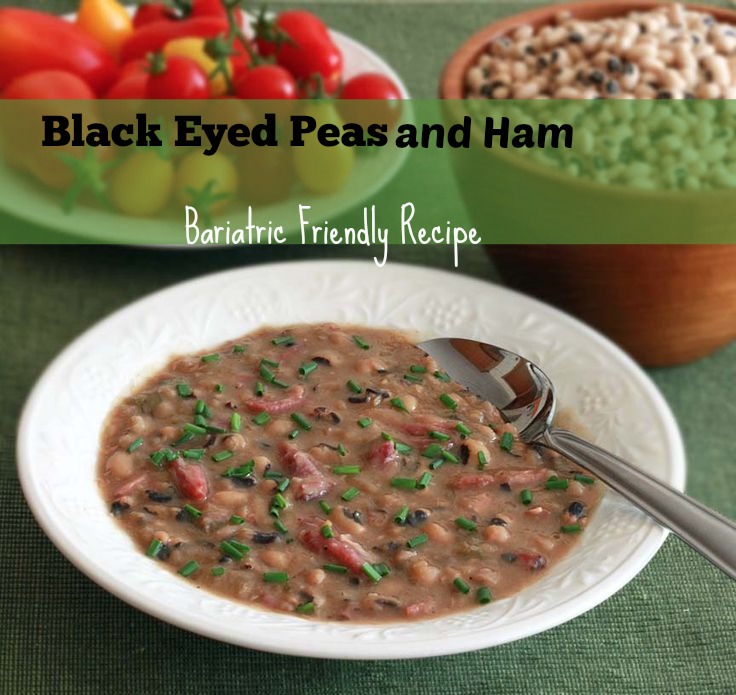 One Pound of Dry Black-Eyed Peas

One Tablespoon of Cajun Seasoning

Salt and Pepper, to Taste

You do not have to soak the black-eyed peas for this recipe. Instead, just give them a good rinsing and throw them in the crock pot. Toss in the remaining ingredients, and cook on medium heat for eight to ten hours, while you escape the kitchen and spend some time with the family.

Return to the kitchen occasionally, only to peek in the crock pot and brag on how hard you’re working to prepare a healthy meal that is sure to bring good luck in the New Year. Serve this delicious meal with a low calorie, high protein corn bread recipe.

Why I decided to have Gastric Sleeve

How to Make the Perfect Bariatric Smoothie